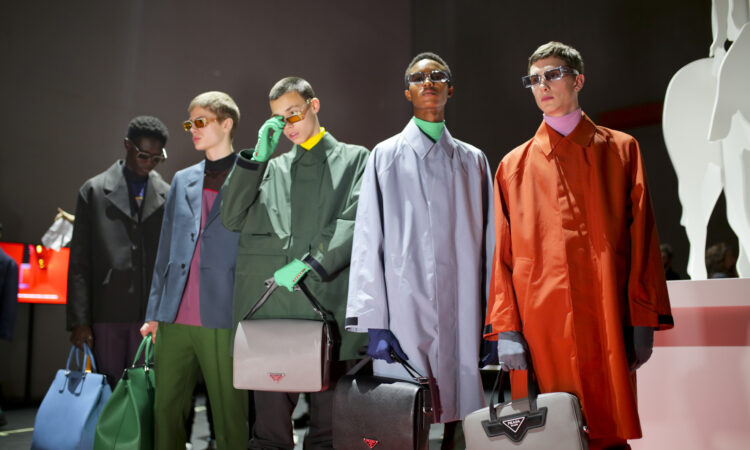 Prada is the most anticipated runway of Milan Men’s Fashion Week 2022.

Creative resource suppliers Design Bundles looked into the brands and designers announced for the Winter 2022 Milan Men’s Fashion Week to reveal which runway is the most anticipated of the event. Rankings were based on website traffic statistics, Google search volumes and Instagram follower counts, with Prada coming out on top.

Prada is the most anticipated brand of Milan Men’s Fashion Week. Their Spring 2022 Menswear collection was one of the most talked about runways of the season, and this season proves to be no different. Prada’s official Instagram account has 28.2 million followers, the most of any other designers and brands featured at this year’s event, while the brand also has the highest web traffic and most Google searches of those attending.

The second most anticipated runway of the show is Fendi. The Italian brand’s official Instagram account has 18.3 million followers, as well as coming in as the second most searched for brand and the second highest web traffic of the show. Fendi’s most recent runway, ‘Pre-Fall 2022’, turned traditional runway styles on its head with the collaboration between Fendi and Versace, producing ‘Fendace’. Speculation has risen around whether the new ‘Fendace’ brand could return to this year’s Milan Men’s Fashion Week.

Dolce & Gabbana ranks as the third most anticipated runway of the show. The brand boasts the second highest Instagram following, 27.3 million, cementing D&G in the fashion hall of fame, while it also ranks fifth in website visits. However, Dolce & Gabbana came in 12th place for Google search rankings out of the total 51 runways announced, a relatively low ranking for one of the largest brands featuring in the show.

Emporio Armani comes in fourth place, with 18 million Instagram followers, ranking fifth in Google search rankings, and an impressive third in web traffic rankings, while sister brand Giorgio Armani sits in fifth. However, Armani has made the decision to cancel both Emporio and Giorgio runways at this year’s Milan Men’s Fashion Week due to growing concerns around the pandemic.

A spokesperson from Design Bundles commented: “Milan Fashion Week is always a hotly anticipated event, with Milan claiming the moniker of ‘Fashion capital of the world’. It’s no surprise that this year’s Men’s Fashion Week is on everyone’s minds, with the most anticipated designers and brands set to make big statements on the runway. It is very unfortunate to hear well established names such as the Armani brand pulling out of the show, but with concerns around the pandemic rising, it is understandable. Hopes are still high that the show goes ahead in full swing, and it should be interesting to see who has the best runway of the show.”